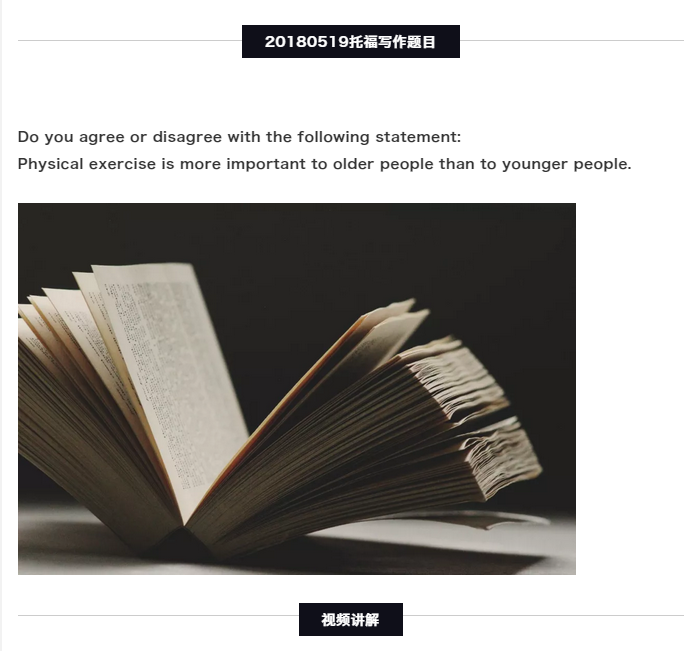 Outstanding physical fitness carries along with it numerous benefits to people of different ages, especially in the present fast-paced society. However, in some public places such as parks, it is often observed that more often than not, older people are the ones who exercise the most instead of the younger generation. Thus a heated debate arises - Whether exercise is of greater important to the old than to the young? Some may insist that young people need more exercise, but I believe that it is more valuable for older ones to keep exercising for the following reasons.

To sum up, I strongly support that physical exercise means much more to the old than to the young. On one hand, senior citizens can effectively avoid many diseases through exercise. On the other hand, they can meet more new friends through this process to enrich their life.

To begin with, physical exercise helps the elderly stay away from various diseases. Getting old, people's immune system and different organs do not work as efficiently and healthily as those of the young. To make things even worse, this fast degeneration inevitably causes much more diseases, chronic or acute. However, exercise forces the aged to keep moving and practicing their body parts, which results in better blood circulation, physical fitness, as well as a sound psychological state. Faster blood circulation is conducive to detoxifying one's body; Frequent move of muscles contributes to their stronger power; Brain will secrete some chemical material to generate sense of pleasure and relaxation. For example, living at a local 猜词互动（正确答案是nursing home）, my grandparents, along with other old people there, are asked to exercise three times a day. Their physical conditions being weaker than the young, what they could do only include some slow and simple exercise, such as jogging, Tai Chi, and badminton. When the weather is fine, they are also organized to go hiking or walk to some nearby parks or gardens. Thus, the annual health report of their nursing home shows that their health index is 5% better than the city's average level.

Besides, old people could broaden social circle while exercising, bringing more happiness to the plain life. At an older age, they are not physically capable of travelling a long distance or join some parties as younger ones do. Most of the time, they only stay at home or at most walk to some nearby places. This phenomenon could effectively be changed by their doing exercise, because of which they could find new friends of common interests and share happiness and sorrows. Plus, the limitation of their physical condition, on the other hand, ensures their frequent participation of the same group, which also strengthens their relationship with new friends. Take Chinese older generation as an example. The famous square dance from China has spread around the world and its main members are the retired people who have few entertainments at home. These people choose among many types of dances, from fans to umbrellas, from Mongolian to Tibetan, from classical to traditional. You could often hear them talk about the dance at first and then spread the topic to family relationship and other gossips, all of which often causes laughter. This happiness can hardly be given by their busy children who cannot visit them that often.

However, exercise is also important for the young, as they are burdened with huge pressure from either work or study. However, their entertainments and social activities are much more than the old, which is also a form of exercise. Plus, they have more friends in daily life so that there are more listeners sharing their thoughts and stories. They do not have to meet new friends particularly through exercise. 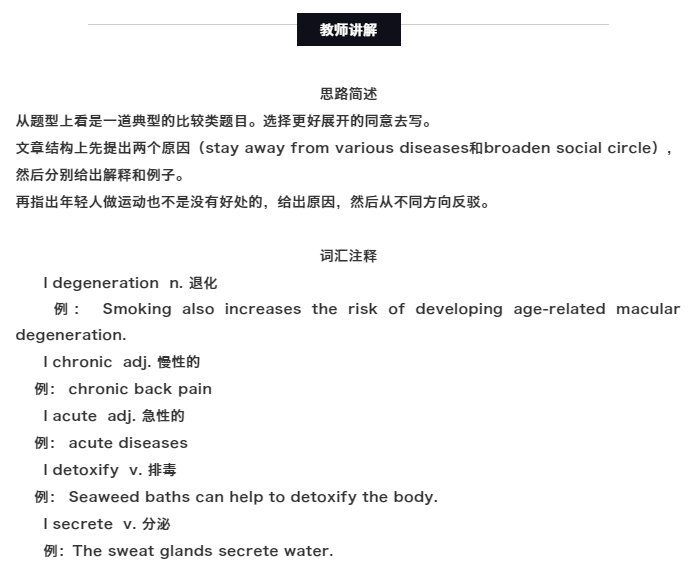